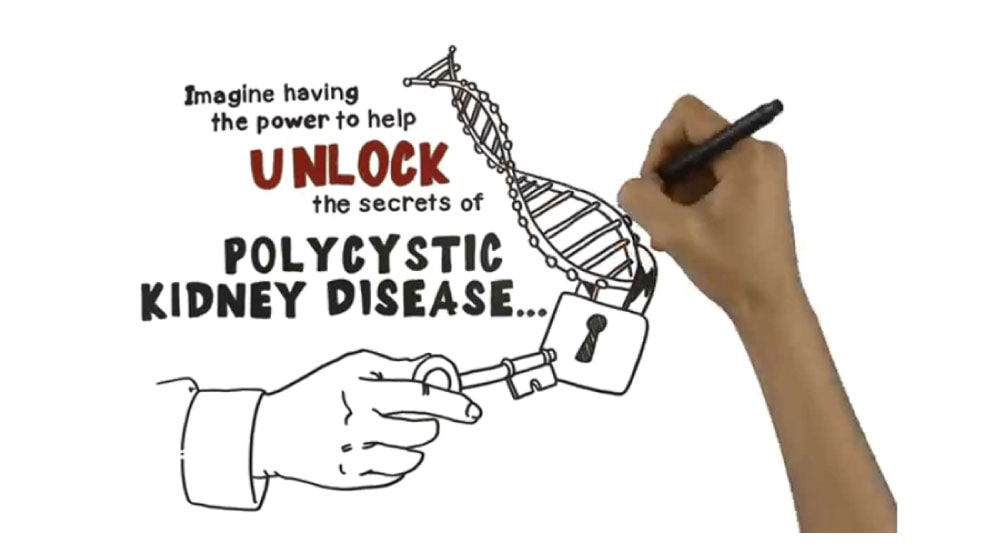 Do I have Autosomal Dominant Polycystic Kidney Disease if my father has it?

What is Polycystic Kidney Disease?

Polycystic kidney disease (PKD) is a genetic disorder characterized by the growth of numerous cysts in the kidneys. The kidneys are two organs, each about the size of a fist, located in the upper part of a person's abdomen, toward the back.

The kidneys filter wastes and extra fluid from the blood to form urine. They also regulate amounts of certain vital substances in the body. When cysts form in the kidneys, they are filled with fluid. PKD cysts can profoundly enlarge the kidneys while replacing much of the normal structure, resulting in reduced kidney function and leading to renal failure.

When PKD causes kidneys to fail-which usually happens after many years-the patient requires dialysis or kidney transplantation. About one-half of people with the most common type of PKD progress to kidney failure, also called end-stage renal disease (ESRD).

PKD can also cause cysts in the liver and problems in other organs, such as blood vessels in the brain and heart. The number of cysts as well as the complications they cause help doctors distinguish PKD from the usually harmless "simple" cysts that often form in the kidneys in later years of life.

In the United States, about 600,0001 people have PKD, and cystic disease is the fourth leading cause of kidney failure. Two major inherited forms of PKD exist:

What is autosomal dominant PKD?

The polycystic kidney roughly retains the same shape as the healthy kidney.

The cysts grow out of nephrons, the tiny filtering units inside the kidneys. The cysts eventually separate from the nephrons and continue to enlarge. The kidneys enlarge along with the cysts-which can number in the thousands-while roughly retaining their kidney shape. In fully developed autosomal dominant PKD, a cyst-filled kidney can weigh as much as 20 to 30 pounds. High blood pressure is common and develops in most patients by age 20 or 30.

What are the symptoms of autosomal dominant PKD?

The most common symptoms are a pain in the back and the sides-between the ribs and hips-and headaches. The pain can be temporary or persistent, mild or severe.

How is autosomal dominant PKD diagnosed?

In autosomal dominant PKD, the onset of kidney damage and how quickly the disease progresses can vary. Kidney imaging findings can also vary considerably, depending on a patient's age. Younger patients usually have both fewer and smaller cysts.

Doctors have therefore developed specific criteria for diagnosing the disease with kidney imaging findings, depending on patient age. For example, the presence of at least two cysts in each kidney by age 30 in a patient with a family history of the disease can confirm the diagnosis of autosomal dominant PKD.

If there is any question about the diagnosis, a family history of autosomal dominant PKD and cysts found in other organs make the diagnosis more likely.

In most cases of autosomal dominant PKD, patients have no symptoms and their physical condition appears normal for many years, so the disease can go unnoticed. Physical checkups and blood and urine tests may not lead to early diagnosis. Because of the slow, undetected progression of cyst growth, some people live for many years without knowing they have autosomal dominant PKD.

Once cysts have grown to about one-half inch, however, diagnosis is possible with imaging technology. Ultrasound, which passes sound waves through the body to create a picture of the kidneys, is used most often. Ultrasound imaging does not use any injected dyes or radiation and is safe for all patients, including pregnant women. It can also detect cysts in the kidneys of a fetus, but large cyst growth this early in life is uncommon in autosomal dominant PKD.

More powerful and expensive imaging procedures such as CT scans and MRI also can detect cysts. Recently, MRI has been used to measure kidney and cyst volume and monitor kidney and cyst growth, which may serve as a way to track the progression of the disease.

An ultrasound imaging device passes harmless sound waves through the body to detect possible kidney cysts. Diagnosis can also be made with a genetic test that detects mutations in the autosomal dominant PKD genes, called PKD1 and PKD2.

Although this test can detect the presence of the autosomal dominant PKD mutations before large cysts develop, its usefulness is limited by two factors: detection of a disease gene cannot predict the onset of symptoms or ultimate severity of the disease, and if a disease gene is detected, no specific prevention or cure for the disease exists.

However, a young person who knows of a PKD gene mutation may be able to forestall the loss of kidney function through diet and blood pressure control.

The genetic test may also be used to determine whether a young member of a PKD family can safely donate a kidney to a family member with the disease. Individuals with a family history of PKD who are of childbearing age might also want to know whether they have the potential of passing a PKD gene to a child. Anyone considering genetic testing should receive counseling to understand all the implications of the test.

How is autosomal dominant PKD treated?

Although a cure for autosomal dominant PKD is not available, treatment can ease symptoms and prolong life.
Pain. Pain in the area of the kidneys can be caused by cyst infection, bleeding into cysts, kidney stone, or stretching of the fibrous tissue around the kidney with cyst growth.

A doctor will first evaluate which of these causes are contributing to the pain to guide treatment. If it is determined to be chronic pain due to cyst expansion, the doctor may initially suggest over-the-counter pain medications, such as aspirin or acetaminophen (Tylenol).

Consult your doctor before taking any over-the-counter medication because some may be harmful to the kidneys. For most but not all cases of severe pain due to cyst expansion, surgery to shrink cysts can relieve pain in the back and sides. However, surgery provides only temporary relief and does not slow the disease's progression toward kidney failure.

Headaches that are severe or that seem to feel different from other headaches might be caused by aneurysms-blood vessels that balloon out in spots in the brain. These aneurysms could rupture, which can have severe consequences.

Headaches also can be caused by high blood pressure. People with autosomal dominant PKD should see a doctor if they have severe or recurring headaches-even before considering over-the-counter pain medications.

End-stage renal disease. After many years, PKD can cause the kidneys to fail. Because kidneys are essential for life, people with ESRD must seek one of two options for replacing kidney functions: dialysis or transplantation. In hemodialysis, blood is circulated into an external filter, where it is cleaned before re-entering the body; in peritoneal dialysis, a fluid is introduced into the abdomen, where it absorbs wastes and is then removed.

Transplantation of healthy kidneys into ESRD patients has become a common and successful procedure. Healthy-non-PKD-kidneys transplanted into PKD patients do not develop cysts.